The Cinque Terre are by no means a hidden secret like they were yesteryear.  Thanks in part to the Internet, social media and Rick Steves, the Cinque Terre are now a fixed destination on the itinerary of most international travelers coming to Italy.  There’s every reason to visit our area.  It’s just that beautiful.

But if you’re traveling in peak-season (think: Easter week through the end of October) and you think you’re going to find five sleepy fishing villages, you’re wrong.  You’ll find five lovely and picturesque but highly visited villages.  If you’re planning to be here on a weekend during peak-season or a national holiday period (see my post on holidays in Italy for more details) you should by all means expect to find the streets and the trains connecting the villages teeming with visitors.  The good news is that the majority of these people will not actually be staying here (as there’s just not enough lodging to accommodate them) so things go back to their normal, slow place in the early evening when all of the day-trippers head out. 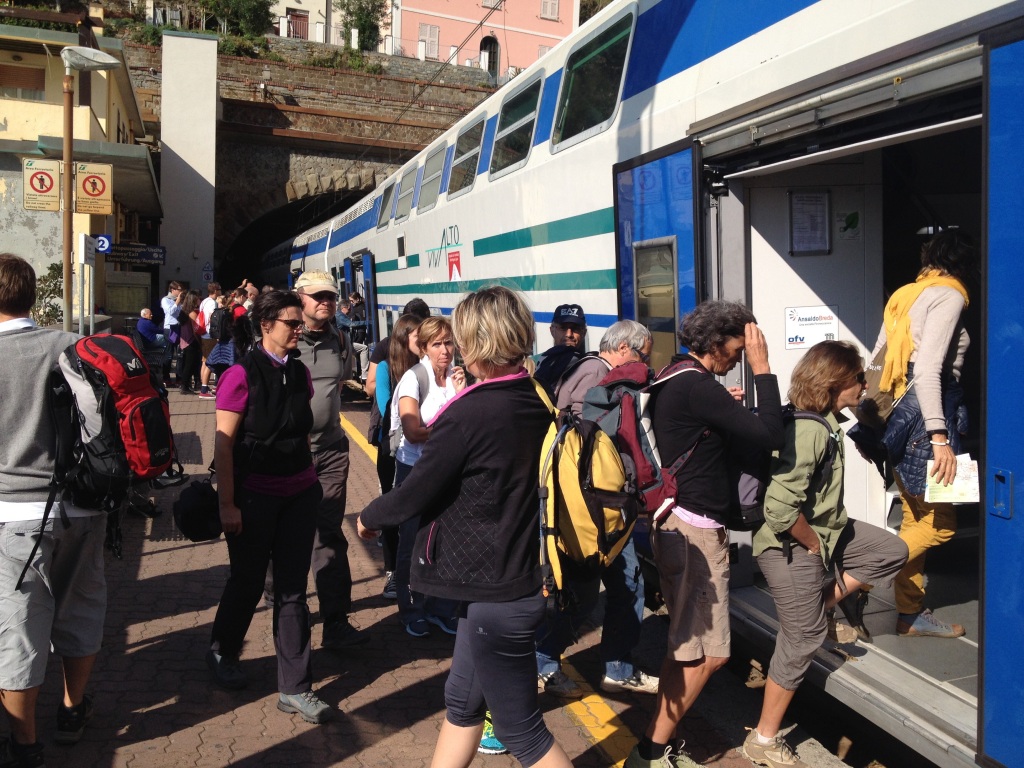 Part of the reason for the crowds…

The Cinque Terre villages are popular in their own right and attract thousands of visitors each year.  But just a few years ago La Spezia (the nearest city to the Cinque Terre, just 8 minutes by train from Riomaggiore) rolled out the red carpet for a new port facility for the large cruise ships which now regularly dock there overnight.  As La Spezia is a working city (and by no means touristic) the city and its residents were beyond ecstatic about this development as it promised the creation of new jobs and tourism to an otherwise off the map city.  Taking advantage of the close proximity to the Cinque Terre, the different cruise lines offer their passengers the possibility to take a day tour of the five villages.  These guided groups are large and can overwhelm and congest the narrow streets and tiny villages of the Cinque Terre.  This is not what we consider “sustainable tourism” and the topic is currently a tasto dolente (sore spot) with locals.  The five villages of the Cinque Terre are a national park and as such it is believed that the park should take responsibility and action in controlling the influx of these large groups rather than leaving the flood gates open.

My tips on how to avoid the crowds

The Cinque Terre villages are as gorgeous and fascinating as ever.  Despite the potential crowds, it doesn’t take much to get off the beaten path to get a glimpse of  real life in a small Italian village.  However, it’s my hope that the Cinque Terre National Park will take action to protect the natural beauty and delicate nature of these villages and spare them from being overwhelmed with rampant, unsustainable tourism.

6 thoughts on “Crowds in the Cinque Terre”